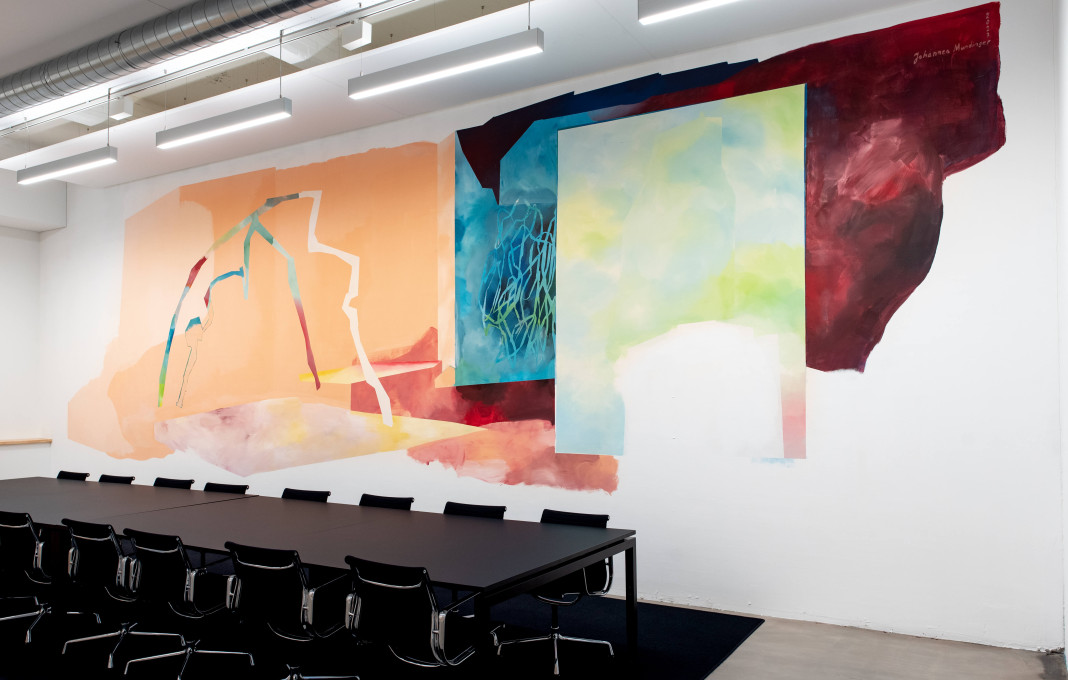 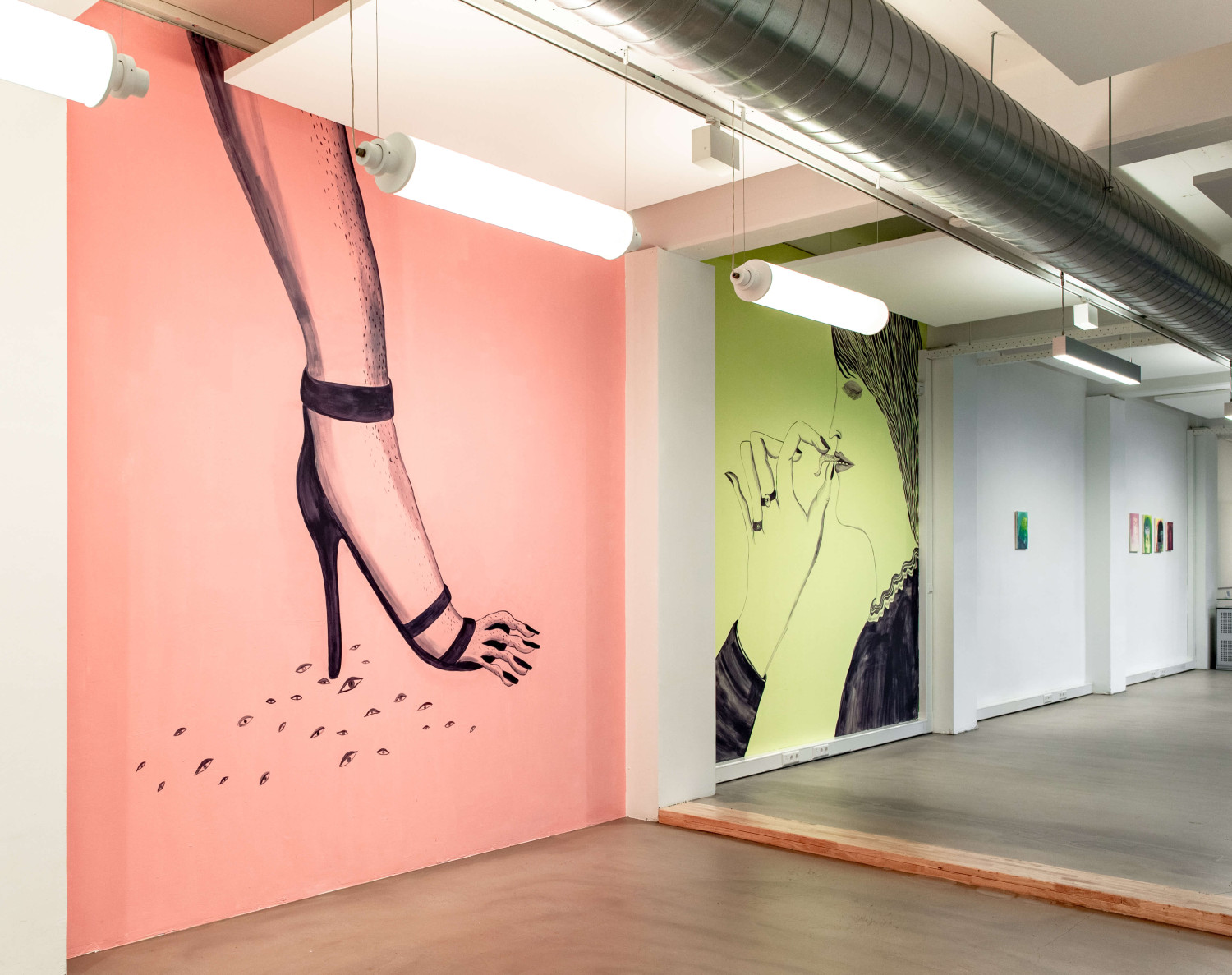 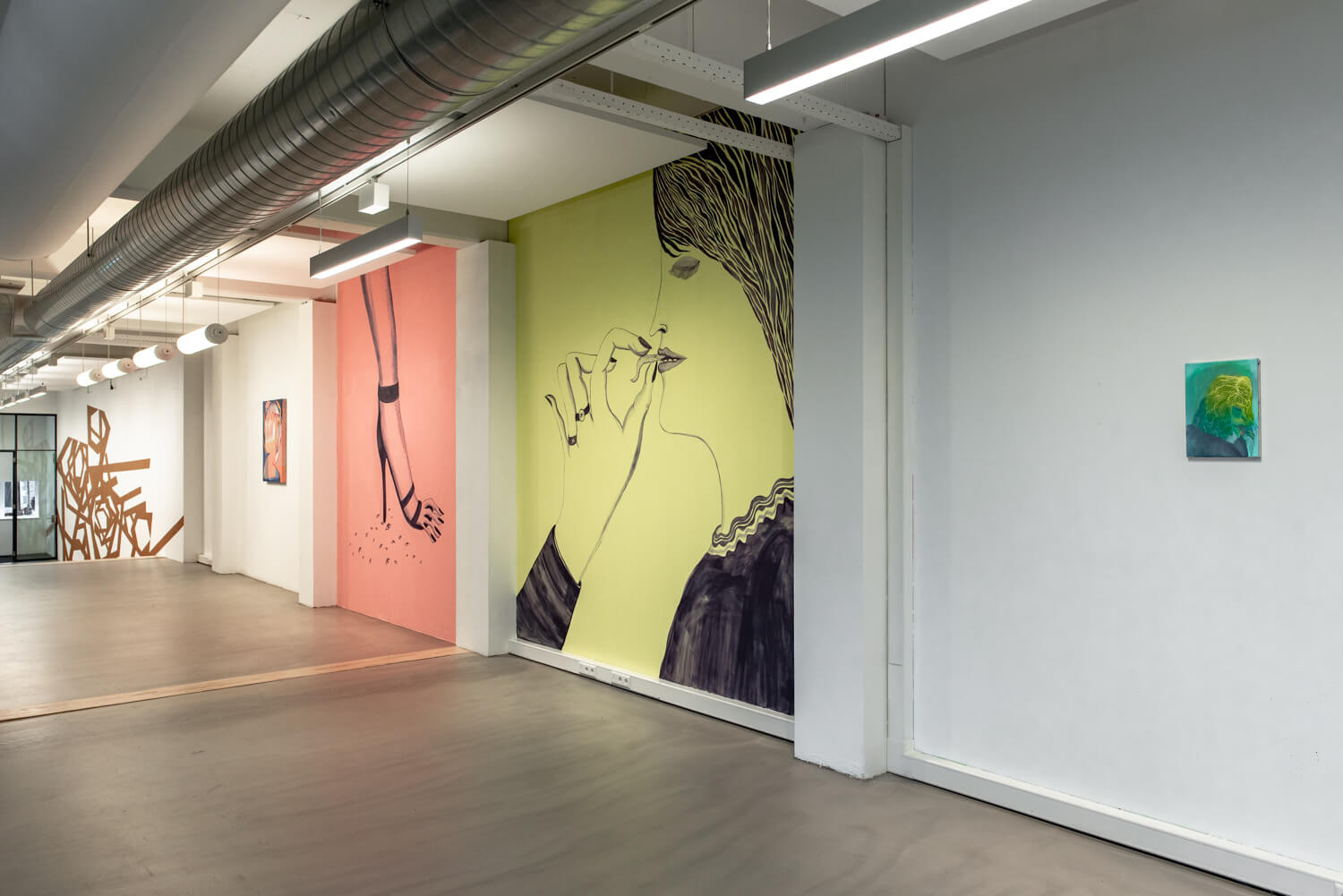 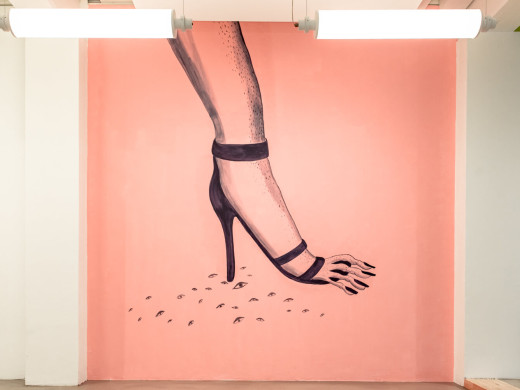 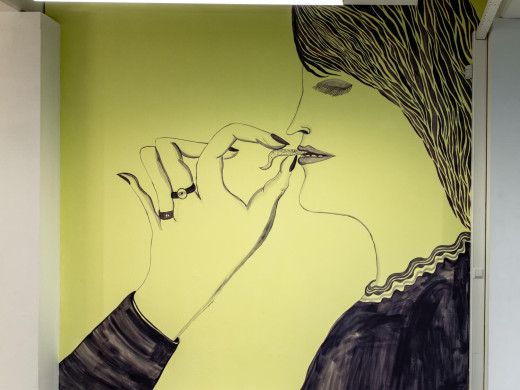 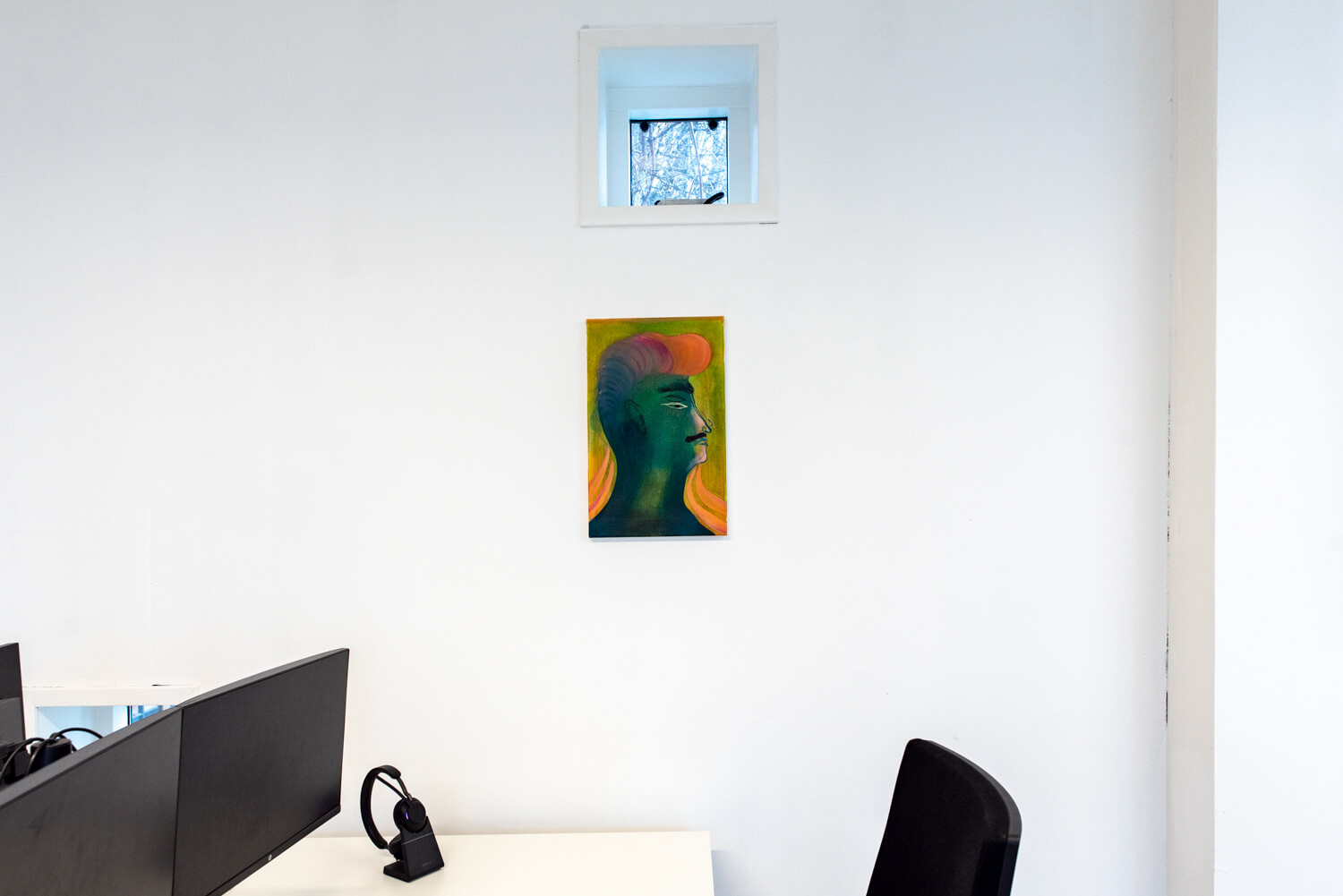 Marie Alys paintings originate from her will to portray the world. Bright and colorful images reveal a world filled with iconic figures placed in renaissance landscapes that hold cocktail glasses or Prada purses, some wear peace buttons or hold their mobile. Some may have evolved from historical figures or religious icons, others rather from LP covers or fashion scenes, as if Matthias Grünewald meets Daniel Richter. Their acratic appearance is both timeless and contemporary. Marie Alys paintings always contain something mystic  because they aim beyond conventions, and come straight from the soul of the maker

The timeless and the contemporary can be considered as the result of Aly`s direct and intuitive style of painting. She centres the cultural or symbolic meaning of her subjects by integrating concepts and techniques from other times and places.
Her paintings originate from a process where intuition is the most important principle,
and in which the image pushes itself forward during the act of painting. This is not a conceptual process. Rather, it stems from a sense of absolute painterly freedom for the artist.

Marie Aly studied painting under Ralf Kerbach at the art academy in Dresden. For her master, she received a scholarship from the Kulturstiftung Sachsen.
From 2008 to 2010 she was a resident at de Ateliers in Amsterdam. In 2009 she won the Royal Dutch Painting Prize. In 2013, received a commission to produce four murals for Kasteel Slangenburg in Doetinchem, and is now commissioned to do a large-scale mural for the German ministry of inner affairs in Berlin.
Her work has been exhibited at various renowned international locations and is included in numerous esteemed private and public collections. 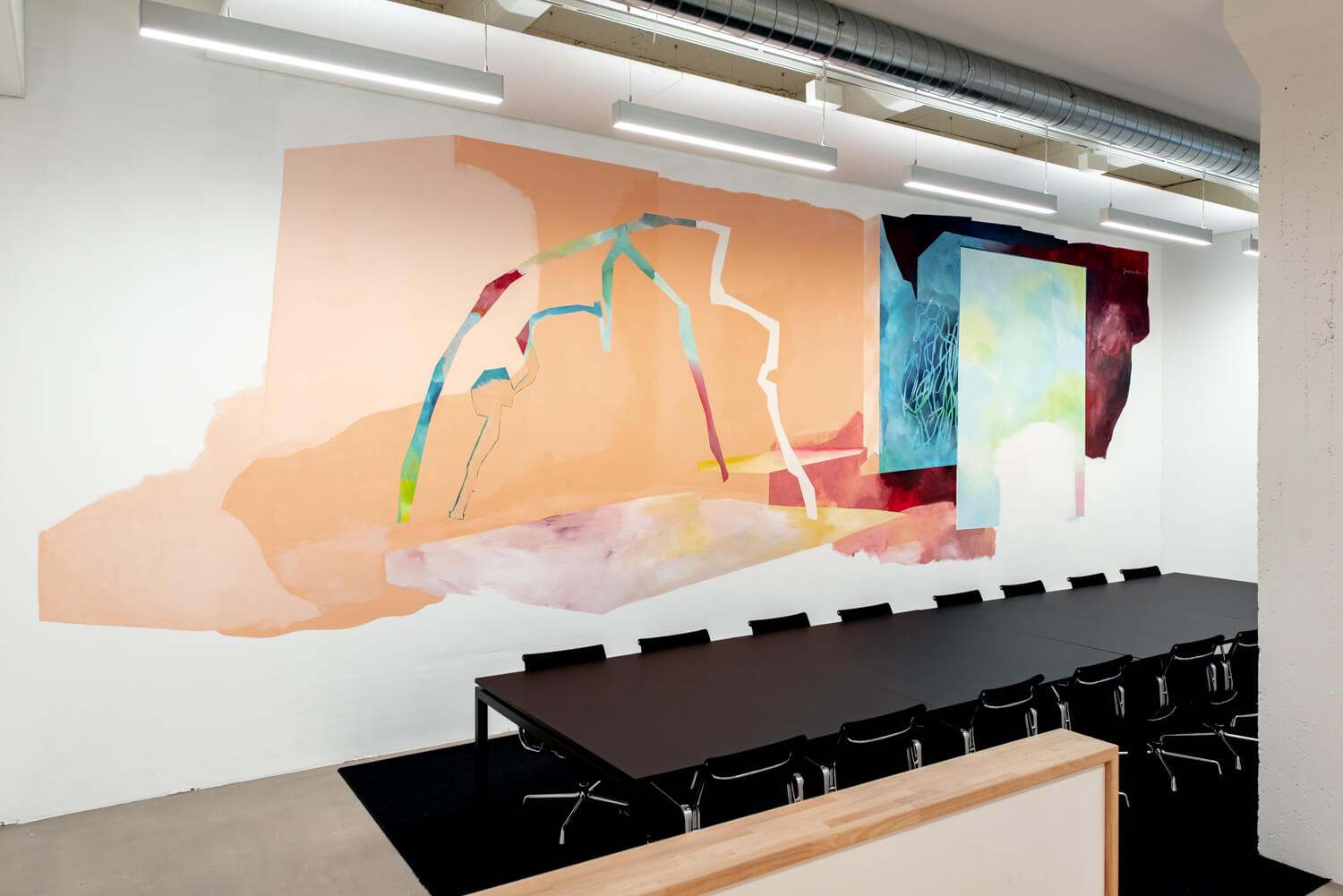 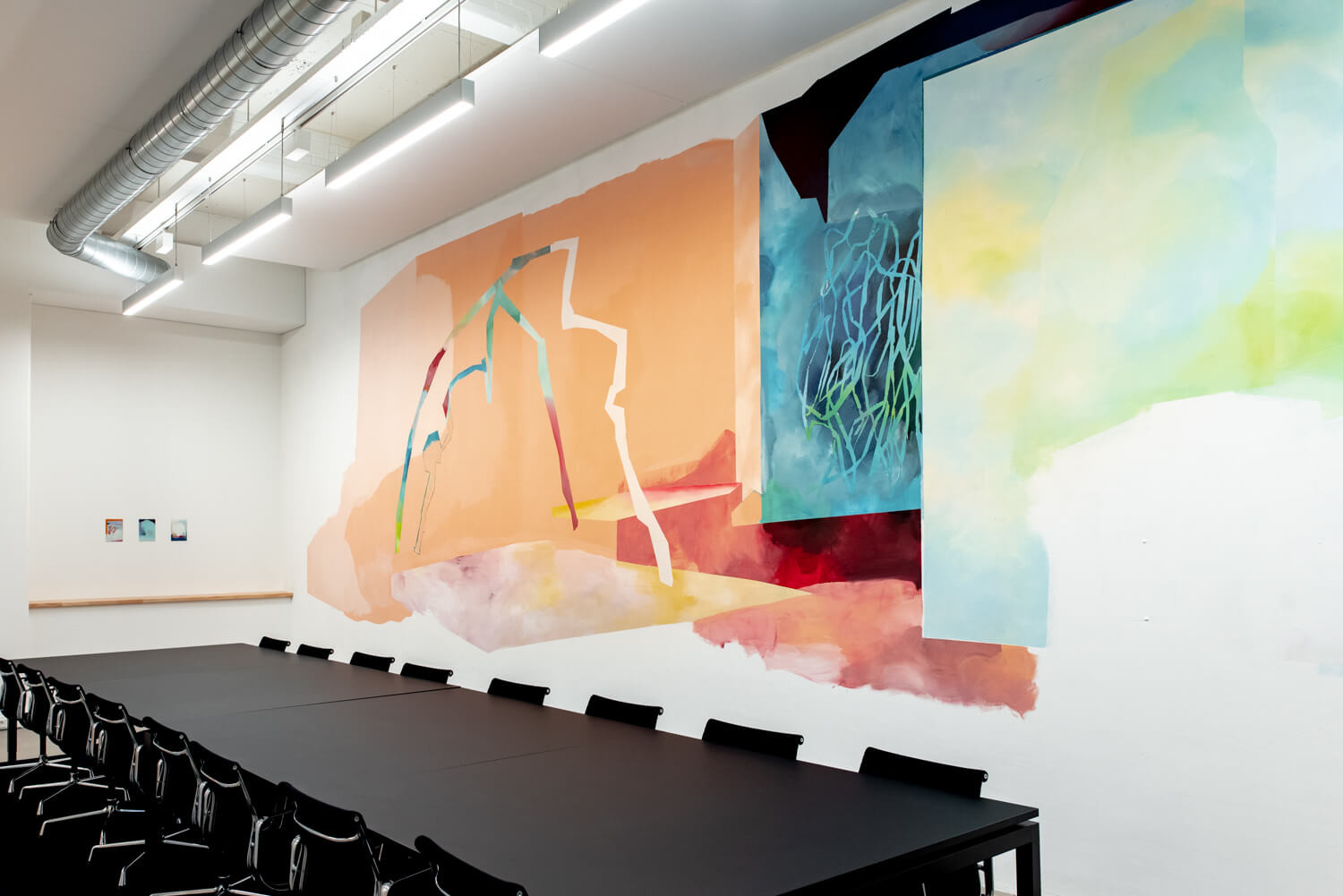 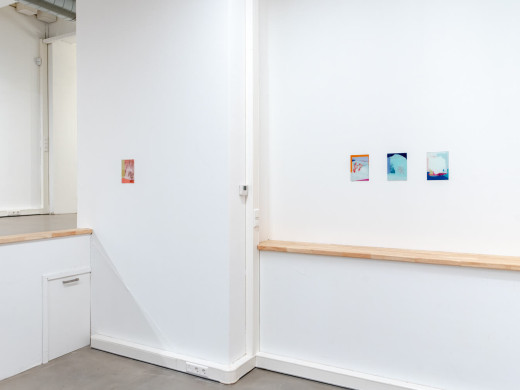 The work of Johannes Mundinger often refers to its certain environment or certain places, dealing with the historical or social context or playing aesthetically with given elements or atmospheres, which is used as a base from where the motive is developed.

Mundinger graduated from Münster School of Design, and also studied at the Academy of Fine Arts, Brussels

Together with Sophia Hirsch he won the jury prize of the Berliner Kunstverein, for their installation Kritische Masse, in 2013.

Mundinger was invited as an artist in Residence to Israel, South Korea, and Serbia. His murals can be found in many European cities, but also in Mexico City, Jerusalem, and Atlantic City. The paintings and murals of Jasper van der Graaf (1975) are composed of clean surfaces, elastic lines, and dynamic structures, which seem to attract and repel each other. The spontaneous abstract constructions are reminiscent of forms from nature, crystals, or stretched chewing gum. Van der Graaf's work is graphically tight, non-figurative, and possesses a (sometimes implied) orderliness. Within abstract art, Van der Graaf occupies a place all his own.

Van der Graaf's work is created in small designs in the collage technique. To this end, old designs are constantly taken apart, then incrementally evaluated into new ones. In the form and color choice of wall works, Van der Graaf takes the spatial conditions into account, creating an interplay between space, form, chance, and choice.

Jasper van der Graaf graduated from the Willem de Kooning Academy in Rotterdam in 1999. His work can be seen at home and abroad, most recently at Transmitter, New York, Mondriaanhuis, Amersfoort, HEDEN, The Hague, PARK, Tilburg, PHK18, Rotterdam and Rob de Vries Gallery & Projects. Van der Graaf is also active as a curator. 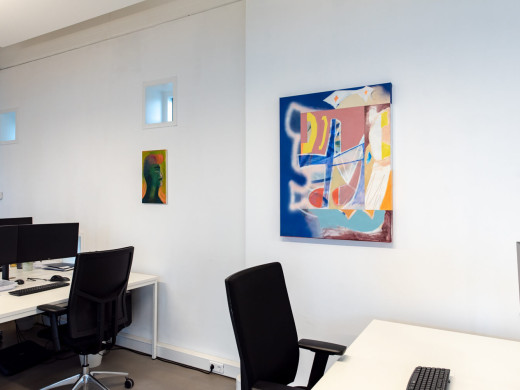 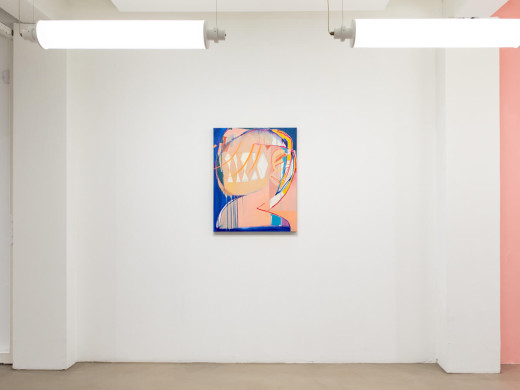 Pavel Rtue born in 1989 is an emerging street artist from Sevastopol, Ukraine. Recently, he has been catching a lot of attention through his abstract pieces and murals on the internet and social media.

He started spraying in the 2000s practicing typical graffiti fonts. In his first attempts, he was trying to imitate amazing graffiti writing that he saw in magazines. Gradually developed his recognizable abstract style. In 2012 he found a way to express his unique style that he was able to call his „own“. Nevertheless, he is always looking for new techniques without losing the desire to experiment and discover new approaches in graffiti. He himself describes his works appropriately as contemporary abstraction and experimental muralism.

Lately, Rtue devoted himself to an internal journey in order to find a new way of interacting with the artwork. He felt that a perfect composition meant not everything, instead, he began always searching for figurative and harmonic solutions. Finally, in his most recent artworks, he tries to combine conscious and unconscious impressions hidden deep inside him. 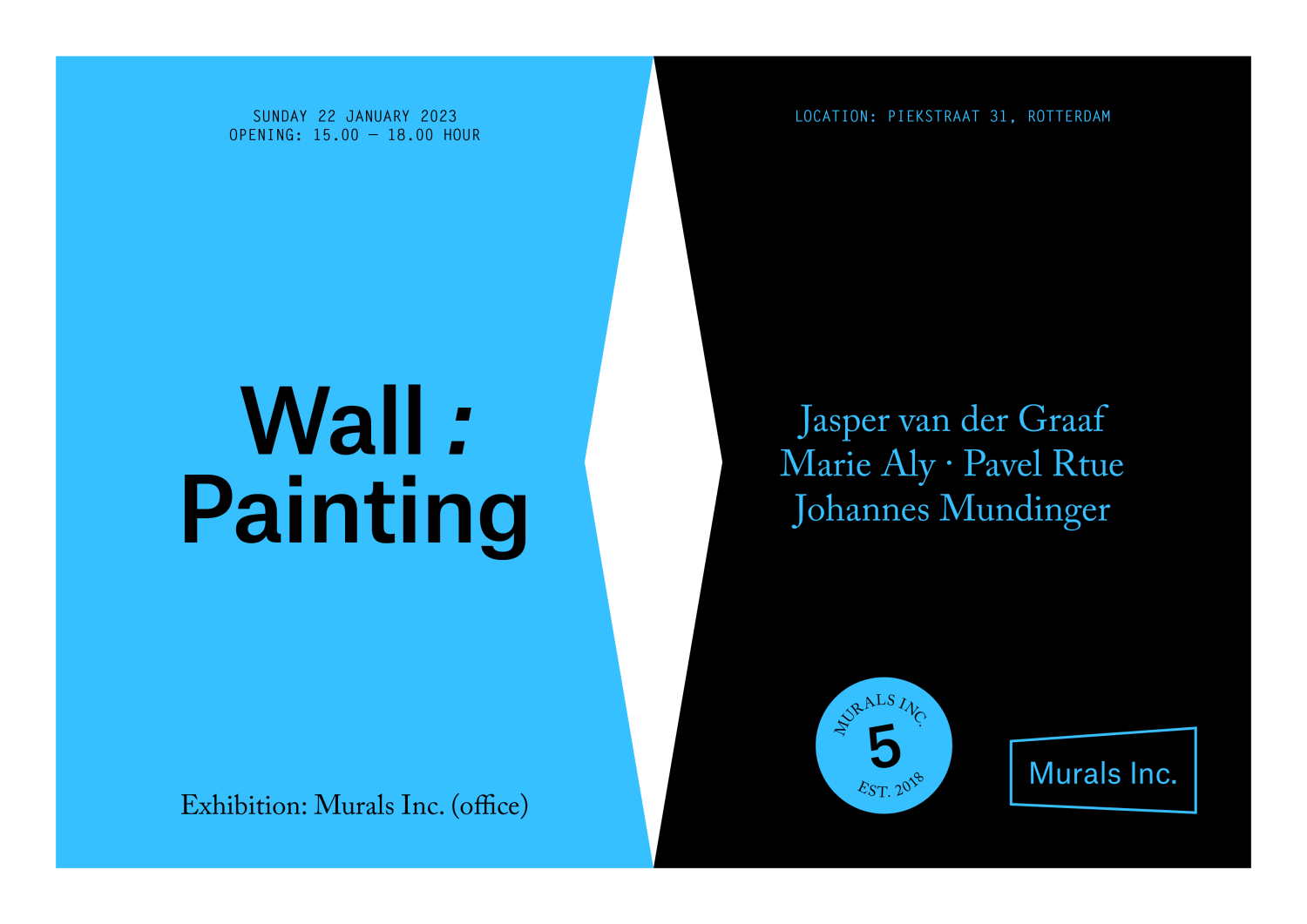 Murals Inc. was celebrating the new year on Sunday, 22 January, with the opening of 'Wall : Painting'.

Also, Murals Inc. is celebrating its fifth anniversary this year. 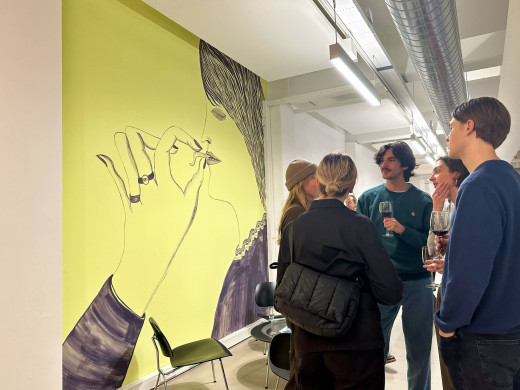 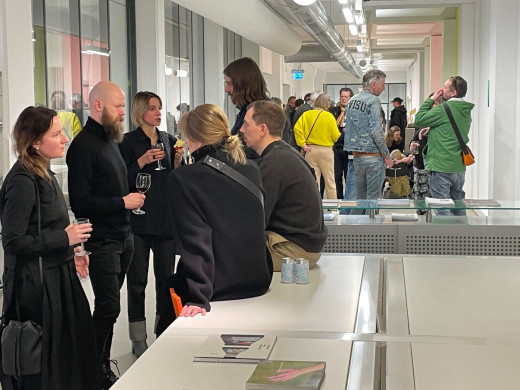